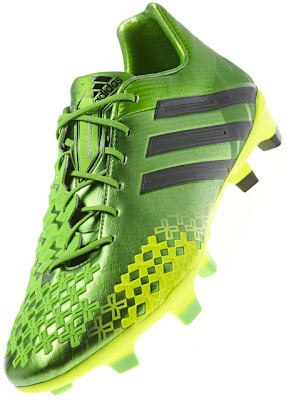 Since their release in back 1994, Adidas’ Predator silo has been a leader in boot technology and innovation. The release of the Predator X was the first step away from the traditional Predator we knew, which had seen subtle evolutions whilst maintaining its unmistakable identity up until then. Now with the retirement of the Predator’s most iconic wearer, David Beckham, it certainly is time for a fully fledged revamp and the Predator LZ II is certainly that.

Arriving in an eye-catching Ray Green/Black/Electricity colourway, Adidas’ once ‘power’ boot has continued its transition into a ‘control’ boot. Building on the five key performance zones established with the first LZ, dribble, first touch, sweet-spot, drive and control/pass. Five zones that combine to create the ultimate control boot.

Adidas’ Hybridtouch upper rovides the benefits of leather and a synthetic for a light weight with a natural feel on the ball. The geometry, shape, height and thickness of each zone has been updated after pro-players feedback and extensive lab testing. Most noticeably, adidas have increased the surface area of the ‘dribble’, ‘drive’ and ‘sweet-spot’ zones.

The dribble zone is designed for quick contact with the ball and close control. The large first touch zone has recessed ribs to cushion impact and stop the ball. On the sweet spot zone 3D ribs ensure longer contact with the ball to generate speed and spin. The drive zone has a raised and thicker 3D shape following the natural curve of the instep to help create rebound distance and open the game. The large control/pass zone is memory foam that has been updated with SL rubber for increased precision. and longer ball contact time. 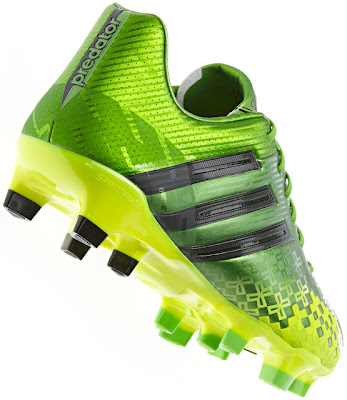