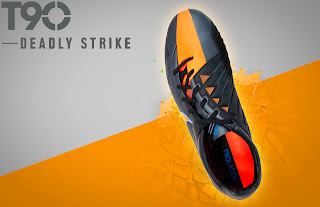 With the new season nearly upon us, Nike have released their new boot colourway collection. Nike already grabbed headlines this week with the release of the new CTR360 Maestri III and have now added this Black/Orange/Blue T90 Laser IV colourway to their summer collection. 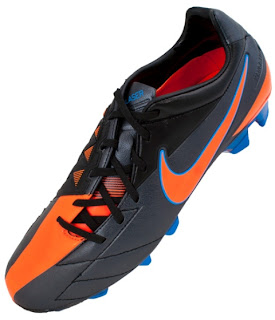 The T90 range is worn by the likes af Wayne Rooney and Fernando Torres and were launched with both a synthetic and Kangaroo Leather upper available. Nike recently replaced the Kangaroo Leather with their Kanga-Lite material however.

The new T90 Laser IV is 20% lighter than the previous version and features a newly configured adaptive shield. To ensure a perfect strike of the ball, the reconfigured shooting and swerve zones on the instep of the boot are designed to flex naturally as the foot contacts with the ball, amplifying the natural benefits of the foot to strike the ball cleanly.

The key contact zones are broken up into flexible strips which enhance the natural power and accuracy of the foot while the swerve zone fins reduced in size and height allow a closer feel to the ball providing friction to curved shots. Finally, along the tongue and top of the boot, shape correction foam increases instep accuracy for a seamless strike of the ball.

The remodelled studs are designed to maximize the speed of penetration and release on pitch without increasing stud pressure for the player. Heel, medial, lateral and toe off edge traction combined with a more flexible plate also enhance agility and reduce slipping.