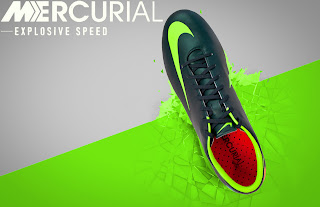 Nike’s newest colourway for the Mercurial Vapor VIII certainly has a familiar look to it. Back in July 2009 Nike unveiled the Black/Volt Superfly I colourway before Cristiano Ronaldo’s signature Black/Volt/Dark Shadow CR7 Superfly III were released in April last year. Now Nike have released this Seaweed/Volt/Red colourway. 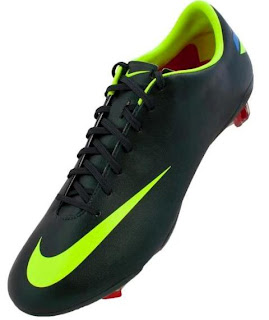 Although the colourway is a slightly off black, which Nike have called ‘Seaweed’, they still look pretty close to two colourways that proved massive hits with boot fans - and we expect the same with this colourway.

Nike made some modifications from the previous Vapors to improved the new Vapor VIII. The new colourway features an improved upper material from the launch colourways which first featured on the Clash Collection boots. Treated to be softer and more comfortable the leather-like synthetic offers great touch and control properties in both wet and dry conditions.

The toe-box reinforcer has a sleeker, closer feel aiding control and touch. Nike’s new Anatomic Last takes the fit of the boot to a new level of support and stability. This effect is enhanced by a more minimalist and softer heel counter, maximizing both comfort and fit.

Direct inject TPU twin studs at the back of the boot allow for a quick release from the turf and the asymmetric design of the stud configuration delivers an explosive start. Sharper blades have been introduced to the Nike Vapor VIII allowing for game changing acceleration. The firm ground version weigh a respectable 187g, whilst the soft ground version weighs 216g.
di July 27, 2012
Email ThisBlogThis!Share to TwitterShare to FacebookShare to Pinterest
Label: 2012-13, Mercurial, Nike, Nike Boots
Newer Post Older Post